The opening of the new Hospitalito Atitlán is the final chapter in a more than 40-year story. The efforts to bring affordable, quality healthcare to the people of the Santiago Atitlán area has been marred by civil war, violence and natural disaster. Its existence is living proof of triumph over adversity.

The Tz’utujil Maya of Santiago Atitlán lacked access to healthcare into the 1960s. After a measles epidemic in 1964 killed more than 600 children, the Archdiocese of Oklahoma City – whose priests were involved in the area – decided to build a hospital. 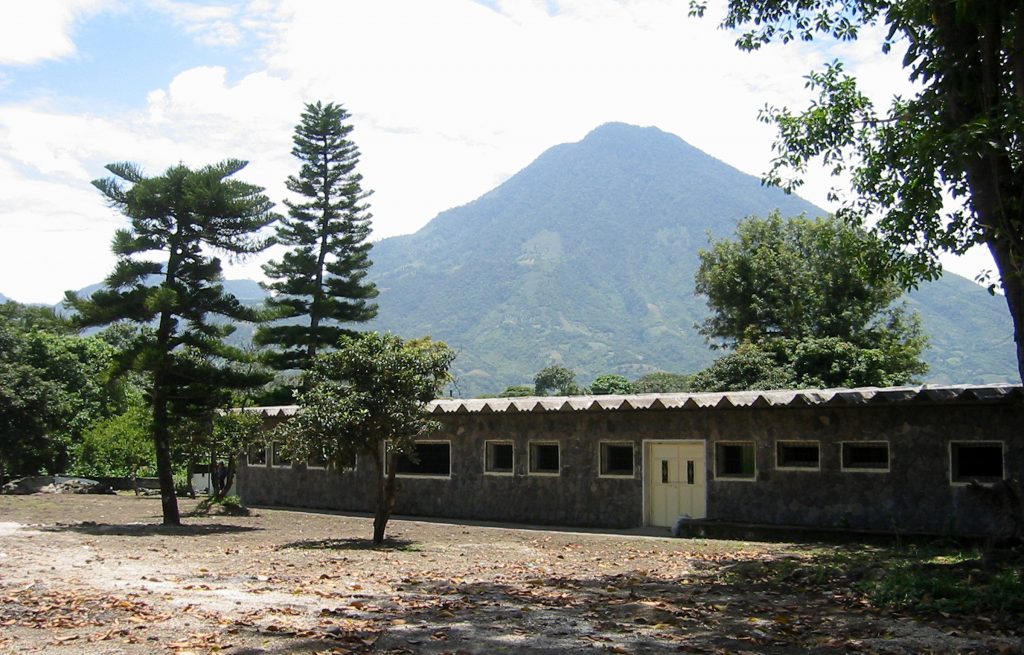 The Guatemalan civil war, which began in the 60s, spread to the Mayan highlands in 1975. Project Concern International, a nonprofit with medical facilities worldwide, took over the Clinica. The horrors of the conflict scarred Santiago Atitlán. More than 2,800 villagers were “disappeared” and their beloved priest, Father Stan, was assassinated.

The Guatemalan military established a base in Panabaj, very close to the hospital’s entrance. Its existence deterred patients from getting treatment, because they were afraid. Then, after a bloody massacre of local Maya at the military base near the hospital, the medical residents from Guatemala City refused to work in the town.

During the cholera epidemic of 1991, the community rallied around the Clinica, building isolation wards on its grounds to hold the rapidly increasing patient population. Yet, continuing to operate the hospital was no longer feasible, because the environment was too dangerous. Clinical Santiaguito closed its doors at the end of the year despite the fact that it was needed and supported by the community.

Once again, trauma patients and women with complicated deliveries had to travel across the lake and up the hazardous mountain road to Sololá. Infant and maternal fatalities soared. For 12 long years, weeds grew to cover the former hospital, while its community was left with little or no access to emergency healthcare.

Bringing the Hospital Back to Life

The residents of Santiago Atitlán suffered greatly as a result of the hospital’s closing with many lives unnecessarily lost. In early 2003, a small group of citizens decided the situation was untenable and called a town meeting to not only discuss renovation of the abandoned building, but also the possibility of turning it into a first-rate 24-hour emergency facility.

The group included Francisco Sojuel Navichoc, retired local health department administrator, Dr. Juan Manuel Chuc, who had started his medical career at the hospital 12 years earlier, and three expatriates – Kathy Searle de Acevedo and Lyn Dickey (from the United States) and Karin Bergstresser (from Sweden). By April, they had formed a civic committee and elected a governing board of directors. The committee was appropriately named K’aslimaal – the Tz’tujil word for life. Its mission was to serve the health needs of local patients regardless of ability to pay or political affiliation. 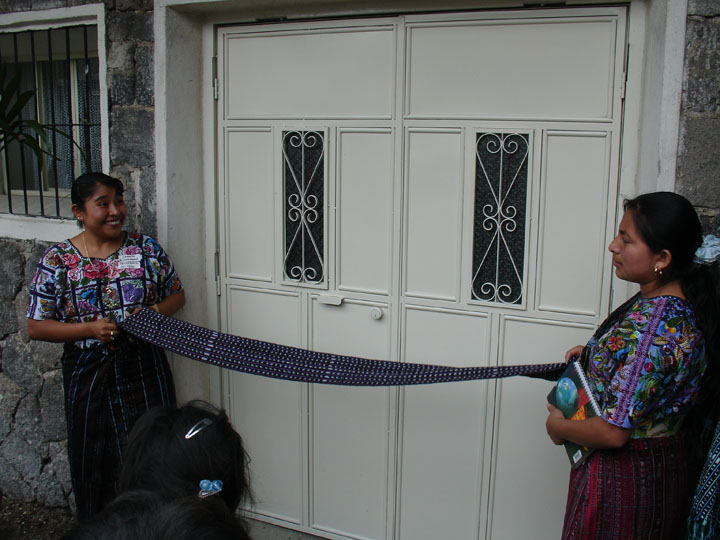 The group held many weekly meetings, garnering the backing of town mayor, Diego Esquina, and growing grassroots support for the reopening of the closed hospital. It secured a 50-year lease on the abandoned buildings, water, electricity and a night watchman. The hospital had an office in the municipal building, and two town council members facilitated the project’s progress.

The board of directors expanded to include Santiago Atitlán Health Commissioner Juan Tziná and Environment Commissioner Diego Chichom. In addition, the project received support from Pueblo a Pueblo.

There was still much work to do – equipment lists to create, cabinets to build, walls to be painted, plumbing to install. But with the arrival of dedicated doctors from the US, K’aslimaal decided to open the hospital’s doors. On April 1, 2005, nearly 1,000 people were on hand to celebrate Hospitalito Atitlán’s grand opening. That first night, Drs. Jack and Bernie Page saved the first of many tiny, new patients’ lives.

During the first month, more than 300 people received medical care. Hospitalito physicians and professional midwives broke new ground, reaching out to the traditional midwives – comadronas – and encouraging them to bring in their high-risk patients for consultations and ultrasounds.

Teams of local and international volunteers worked on the renovation of the old buildings. The first surgical team – from Hope Alliance in Utah – arrived in the summer after the operating room had been refurbished and donated surgical lights installed. It has been a decade since surgery had been performed Santiago Atitlán.

The first operation scheduled was a hernia repair, but when a young woman arrived at the Hospitalito in great pain caused by a ruptured appendix, the surgical team rushed her into the operating room, saving her life. From that day on, the operating room was open for business with the original surgical team joined by Dr. Leah Abraham, a fellow in maternal child health, who was available for emergency cesareans.

A new medical storage and maintenance building, with a kitchen and laundry, was constructed thanks to a generous donation. Another gift was received from the Agostini Foundation for renovation of a second building, the hospital ward. Volunteers worked on walls, floors and electrical installation. The plan was to open the kitchen/storage building in October and the ward in November.

But the destructive force of nature changed everything. 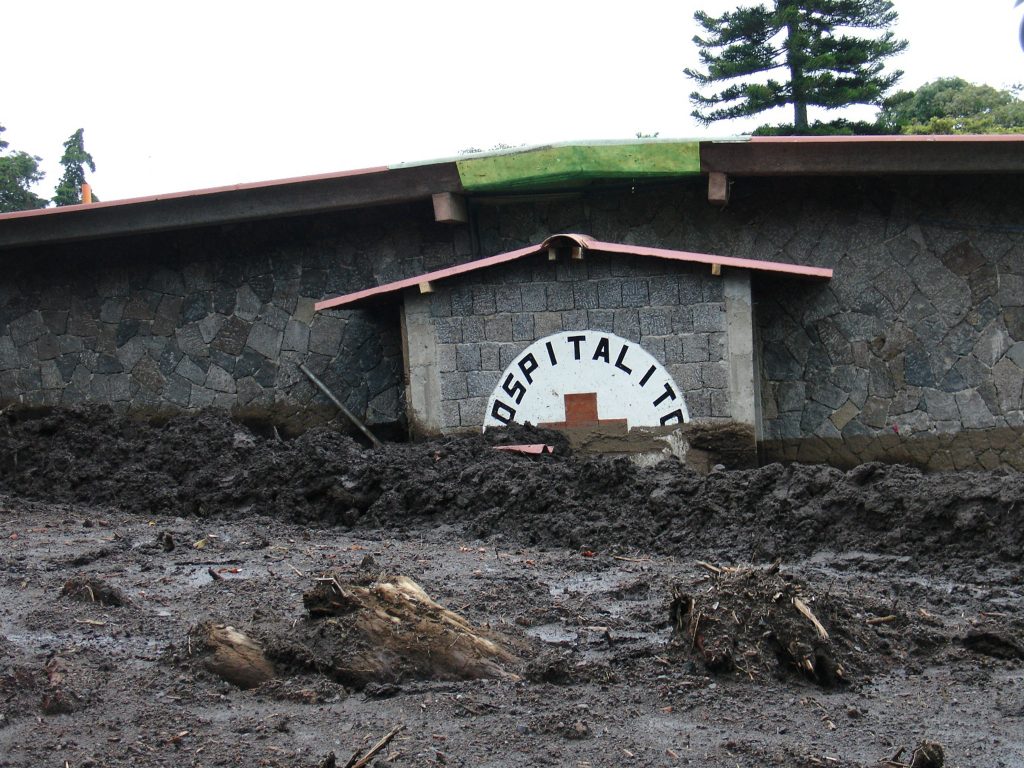 In early October of 2005, Tropical Storm Stan hit Guatemala with a fury, unleashing days of torrential rain. On the morning of October 5th, a rumble of mud, trees and boulders rushed down Tolimán Volcano at more than 60 miles an hour. The landslide buried hundreds of members of the community and broke through the Hospitalito’s doors. It was six months and five days after the grand opening celebration.

At 5:00 am, the volunteer physician on duty, Dr. Mark Lepore, called for help from his cell phone. Dr. Mark moved patients and staff to the far corner of the building, bringing them water, food and mattresses. At the same time, he made plans for the possibility that the entire building would be buried in mud.

Six hours later, he heard knocking on the building’s back door. It was K’aslimaal’s president, Francisco Sojuel, who, with Dr. Leah, had waded through waist-deep mud and debris to reach the hospital. Together, they managed to evacuate the patients to the nearby three-story Justice Center and set up temporary emergency medical treatment.

For three days – as a nonstop stream of injured arrived, carried by family and neighbors – Drs. Mark and Leah worked valiantly to save as many lives as possible.

Nearly 200 people were buried alive by the mudslides and more than 5,000 were left homeless, including some Hospitalito Atitlán employees.

Within days, the K’aslimaal Board found a temporary home, a former backpackers’ hotel. Workmen and volunteers immediately began transforming the facility into an emergency hospital.

Miraculously, the Hospitalito was back in business 16 days after the devastating mudslide. An emergency cesarean was performed, and doctors and nurses began providing health exams for all the local children in USAID temporary shelters. But the coldest months of the year were ahead, and the shelters were merely plastic tarps.

For the next year, Hospitalito Atitlán provided free medical care to victims of the disaster. Family practice physicians, specialists, medical students, nurses and EMT volunteers arrived from abroad to care for the patients. At the same time, improvements continued to be made on the old wooden building.

Social worker Concepción Mendoza, hired days before the disaster, made sure all patients received the same quality of care. A sliding scale was created, so that needy patients not victims of the disaster could receive services for as little as one Quetzal (about 13 cents), ensuring that their dignity was respected. She went on to create the Maternal/Infant Sponsorship Program, which educates women about the importance of prenatal care and expectant families about pregnancy and childbirth danger signs.

By 2006, it was clear that the Hospitalito needed a permanent new home. In just one year, the patient population had doubled, averaging 600 visits a month. Patient load was projected to continue growing. Hospitalito staff had expanded to 24 full-time employees including eight bilingual nurses (Tz’utujil/Spanish), four Guatemalan physicians as well as lab and imaging, central supply, pharmacy, medical records, administration, and housekeeping staff.

The provisional location was clearly not a long-term solution, and the Guatemalan National Institute of Seismologists, Volcanologists, Meteorologists and Hydrologists (INSEVUMEH) strongly recommended that the facility not return to its former location on the south side of town.

Donations poured in from many concerned friends and volunteers, allowing K’aslimaal to purchase an ideal five-acre site on the north side of town; an area considered low-risk for mudslides. 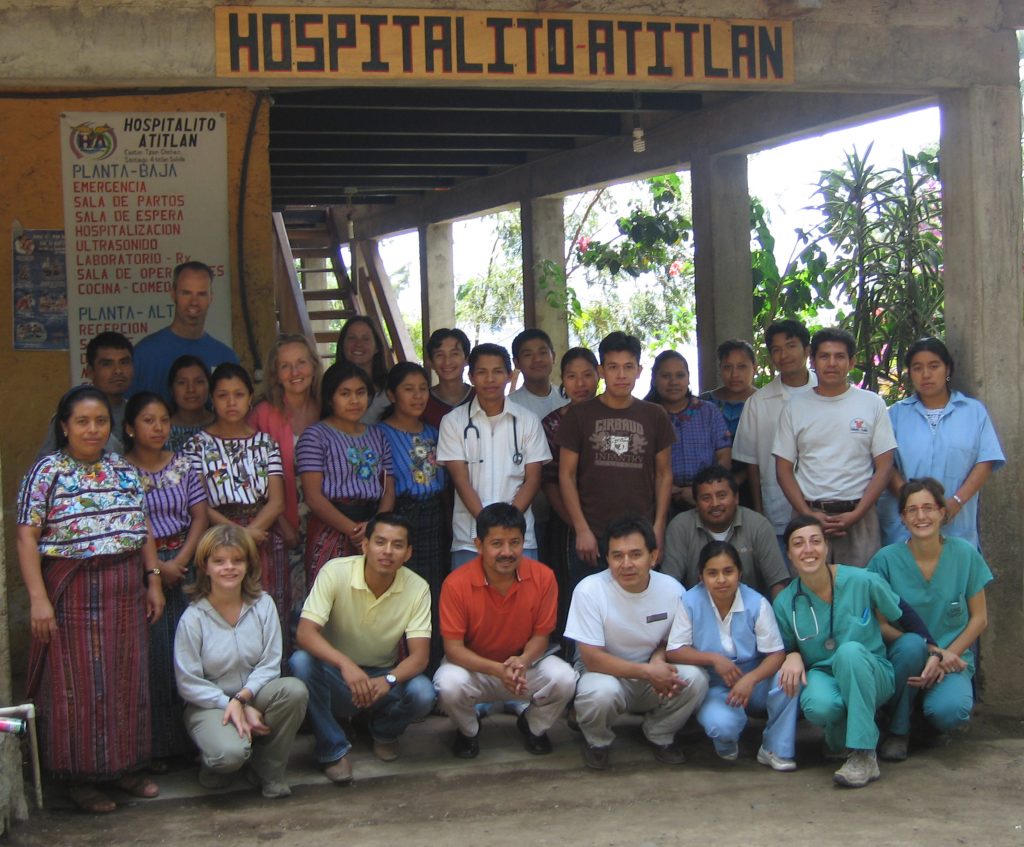 David Schele, an experienced hospital architect based in Austin, Texas, volunteered to design the new hospital.

A widower, his wife was the internationally famous Mayan epigrapher, Linda Schele, who was acquainted with Santiago Atitlán. Schele learned about the hospital’s plight after seeing a documentary about the disaster made by his friend and Mayanologist Andrew Weeks. Schele visited Santiago Atitlán in June 2006 and, soon after, began developing concept drawings of what the hospital would look like.

The design included a much-needed separate medical storage building, which the Archdiocese of Oklahoma City generously offered to fund. The building was completed and in use by October 2007 – two years after the devastating mudslides.

Schele’s firm, The Felder Group is an international leader in environmentally sustainable design, so the plans included many eco-friendly features. Schele turned the work over to a team of Guatemalan architects. Ian Woofenden, senior editor of Home Power magazine, volunteered to install the hospital’s solar system, designed by SunEPI CEO Walt Ratterman (who lost his life installing solar panels in the Haiti) earthquake. SunGrid, an Australian company, is donating a container of solar panels to cover the Hospitalito roof.

The budget for the new hospital building was $1.5 million, all of which was raised. The Kendeda Fund provided a $750,000 matching challenge grant thanks to Bonnie O’Neill who facilitated the donation, which accounted for half of the cost of the new building. The total capital campaign was $2 million with some of the funds going to medical services.